Mumbai bandh LIVE UPDATES: Dalit groups have called for a state-wide bandh today, while the Bahujan Samaj Party (BSP) has sought a debate in the Rajya Sabha over the incident.

Dalit groups have called for a state-wide bandh on Wednesday in protest of the violent clashes that broke out on January 1, resulting in the death of a 30-year-old youth. Several others were also injured. At least five lakh members of the community had gathered in villages around Bhima Koregaon near Pune to attend an event commemorating the 200th anniversary of the Battle of Koregaon. Dalits had clashed with members of the Maratha group.

On Tuesday, members of the Dalit community staged protests in Mumbai, Pune and at least nine other districts in the state, calling for action against the Marathas, and alleging they were targeted on Monday.

The Battle of Koregaon was fought between British troops and the Maratha army led by Peshwa Baji Rao II. The British forces included soldiers from the Mahar community. Dr Babasaheb Ambedkar’s visit to Bhima Koregaon has led to the memorial site being named Shaurya Bhoomi by Dalit activists. What was the Battle of Koregaon?

10.46 am: In Parliament, MPs of several parties have issued adjournment motions over the Bhima Koregaon violence. In the Lok Sabha, Congress leader Mallikarjun Kharge has issues notice under Rule 56, while in the Rajya Sabha, MP Rajni Patel has moved it under Rule 267. Follow LIVE UPDATES from Parliament here.

10.36 am: An advisory has been issued to commuters travelling to the airport, to leave well in advance. The Mumbai Police has also advised keeping in view the likely traffic congestions/diversions enroute to the airport.

10.30 am: At the moment, there are protests being staged at the following places: Below Akurli bridge in Kandivali, Dindoshi near Santosh Naga, Kamraj Nagar, MIDC near Vijay Nagar (Jogeshwari), Arunkumar Vaidya Marg (Dindoshi Kumbharwada Junction). There are also traffic snarls reported from Worli Naka, Kherwadi Junction, Kalanagar and MMRDA Junction.

10.10 am: In case you’re just joining us, here’s a quick update on what’s happening in Maharashtra. Dalit groups have called for a bandh across the state, in response to clashes which broke out on Monday with members of the Maratha community. Protestors are staging a rasta rokho (block the route) protest in parts of the city, including Thane, Goregaon and Virar. There is heavy deployment of police in the city, to ensure the situation remains calm. There are very few taxis and autos plying in the city, due to the bandh. Follow our blog for all the latest news, traffic updates and political reactions coming in.

Also read | Dalit anger spills on street: ‘In the end, only we are penalised’

10.03 am: Train in the Pune division are running as per scheduled, confirms Divisional Security Commissioner D Vikas. There is security in place to ensure the situation remains normal, he adds, reports ANI.

9.57 am: Since last night, Uber and Ola taxis have not been plying in Mumbai. Shivani Tripathi, who works at Goregaon’s Nesco IT park, tells The Indian Express, “I have been trying to look for a cab since half an hour to reach office. Cab services on Ola are not available.” A resident of Andheri, Tripathi says that even autos on road are very few.

9.44 am: Social media is being closely monitored, a senior official tells The Indian Express. He adds that WhatsApp was used to spread hate messages and gather protestors on Tuesday. “Application-based messenger services like WhatsApp played a crucial role in spreading hate messages and seeking support of the protesters to join in the protest,” he said. In some areas, such as Aurangabad, Pune (Rural) and Ratnagiri, internet services have been suspended as a precautionary measure.

9.35 am: Trains were halted at Virar and Goregaon stations this morning for around half an hour, but later resumed, according to the Western Railways PRO. Protesters have been staging a ‘rasta rokho andolan‘ since Tuesday.

Tracks have been evacuated of protestors and train operations have resumed at Virar & Goregaon from 9.05 hrs on WR suburban. Trains are delayed due to it. @drmbct @rpfwrbct

9.30 am: Meanwhile, in Pune, buses heading towards Satara and Baramati have been stopped, according to ANI. They will resume only after further orders. Yesterday, members of the Maratha community had held protests in Pune against the clashes on Monday.

9.26 am: The protests seem to be turning violent in Thane. We’re getting information that incidents of stone-pelting at buses, autorickshaws and other vehicles are taking place. Right now, Section 144 (which bans the assembly of a group of people) has been imposed in Thane. The police are detained people in the district.

9.23 am: The MSRTC PRO clarifies that all its buses are plying in Maharashtra today. “All our buses are plying across the state so far. In case of any vandalism we will take a call. So far there have been no incidents.” Yesterday, at least 11 state buses, including MSRTC and PMPML were damaged.

9.16 am: Around 30 companies of the State Reserved Police Force has been deployed across the state today. The Riot Control Police (RCP) has been pressed in Mumbai, Pune and Aurangabad, among other districts.

9.12 am: The Mumbai Police has issued an advisory to residents to refrain from believing or spreading rumours. It adds, “Don’t believe or spread rumors, continue with your routine activities. Police administration is geared up to deal with any untoward situation.”

Also read | The one dead in Bhima Koregaon clashes: Shivaji on his jacket ‘gave him away’

9.09 am: Traffic update: Despite some agitation at Santosh Nagar Nala, Hanuman Nagar bus stop, Filmcity Road and Dindosh, traffic has not been affected. Many children and officegoers have decided to skip school/office today in light of the bandh in Mumbai, especially people who live in the western suburbs. Further, many private schools have closed due to low attendance and because school buses are not plying.

9.06 am: Mumbai’s famous dabbawala association has decided not to work today, in light of the situation in the city. Speaking to ANI, head of the association Subhash Talekar said ensuring transportation and delivery of the tiffins on time is difficult due to the bandh.

9.02 am: So far, nine cases have been registered by the Mumbai Police. Since Monday night, over 100 people have been detained in connection with the protests in the city.

8.52 am: A train at Thane railway station was briefly halted after protestors came onto the tracks to block its movement. Around 50-60 people had gathered to stall servies, which were later resumed. “Few protestors tried to disrupt Railway services at Thane but were immediately cleared by RPF and GRP officials. Services are running uninterrupted on Central Railway as of now,” the CPRO Central Railway said.

8.27 am: We’ve compiled a list of areas in Mumbai which were affected by the protests on Tuesday. The worst affected routes were through Chembur and the Sion Panvel Highway. While a call for a bandh has been issued on Wednesday as well, here are some areas which may be clogged.

8.16 am: Chembur wears a deserted look today. Shops remain closed, while few pedestrians are seen on the streets. On Tuesday, protestors had held a ‘rasta rokho andolan’ at Chembur station, stalling trains and forcing shops outside the station to down their shutters. 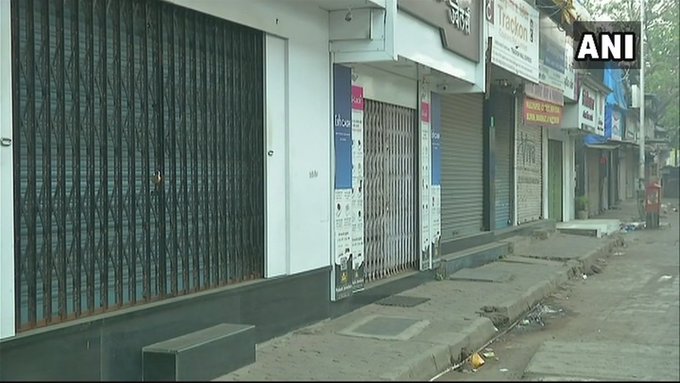 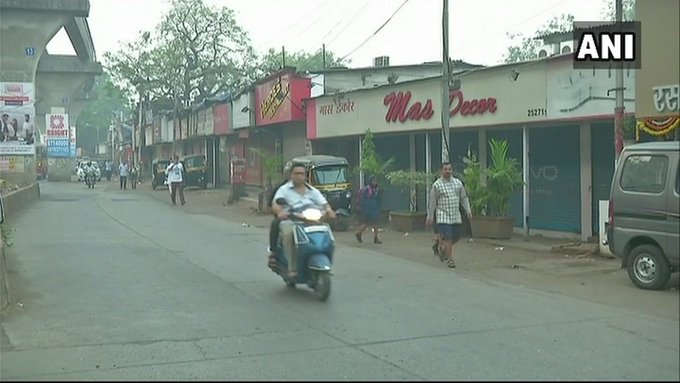 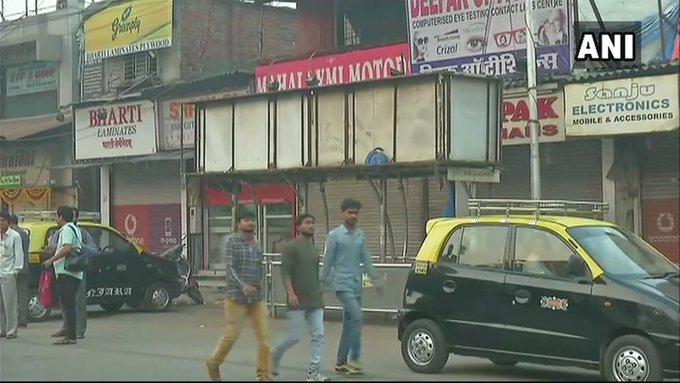 8.14 am: In the wake of the call for a bandh in Mumbai today, Anil Garg, from the School Bus Owner’s Association says school buses won’t run in the city today. “Can’t risk students’ safety and security. Will take a second decision at 11 am if we can run them in the second half, depending on the situation,” he is quoted as saying by ANI.

7.57 am: The police on Tuesday had filed a criminal case against two pro-Hindutva leaders under sections of the IPC for attempt to murder, rioting and sections of the Prevention of Atrocities Act. The leaders are Milind Ekbote, 60, of Samast Hindu Aghadi and Sambhaji Bhide, 85, of Shiv Pratishthan Hindustan. Ekbote, formerly a corporator, said the case against him was “completely false.”

7.46 am: Maharashra Chief Minister Devendra Fadnavis on Tuesday had sought a judicial probe “by a sitting judge,” and announced Rs 10 lakh as compensation for the kin of the youth — identified as Rahul Phatangade — who was killed on Monday. Fadnavis had said, “A sitting High Court judge will head the inquiry and the youth’s death would be probed by the CID,” reported PTI.

7.30 am: Additional forces of the Maharashtra police has been kept on standby today, as Dalit leaders have called for a state-wide bandh. In some areas, internet services may be suspended to curb rumours from spreading through social media. The police may invoke prohibitory orders if needed. Speaking to The Indian Express DGP Satish Mathur said, “We have made elaborate arrangements to keep the situation under control in view of the bandh. Extra forces have been kept on standby. Some areas have been identified where internet could be suspended so people cannot spread rumours on social media.”

7.14 am: On Tuesday, members of the Dalit community took to the streets in protest of the violence on January 1, alleging they were targeted by the Maratha community. State buses were damaged in yesterday’s protests; at least 11 buses of the Maharashtra State Road Transport Corporation (MSRTC) and the Pune Municipal Parivahan Mahamandal Limited (PMPML) were damaged.

7.00 am: Dalit groups have called for a state-wide bandh today, while the the Bahujan Samaj Party (BSP) has sought a debate in the Rajya Sabha over the incident. Follow our live blog through the day for news and updates.

(With inputs from Express News Service and agencies)

R. Thirunavukarasu: Dear Sridhar, Thanks for sharing this kind of rare speeches of Dr. Ambedkar,, mo...