Get the latest creative news from FooBar about art, design and business.

NCRB data on atrocities against Dalits shows that urban areas tend to reflect the pattern in their surrounding rural belts. (Express Illustration)
Atrocities

A screenshot from a viral video showing the body of a Dalit man being lowered from a bridge as caste Hindus had reportedly barred access to lands encroached by them. Photo: Special Arrangement

“This is a good moment to challenge the narrative in India also and talk about the age-old repression of Dalits, which is visible even during the COVID-19 pandemic with discrimination denying people aid”

Spurred on by U.S. anti-racism protests, Dalit campaigners on June 10 called on India to acknowledge centuries of oppression they have endured and recognise that “every life matters”.

Dalit campaigners said they supported the Black Lives Matter protests in response to the death of African-American George Floyd after he was knelt on by a white police officer, and hoped it would ignite a similar conversation in India.

“We extend our solidarity because we feel them and we have faced discrimination ourselves,” said Omprakash Mahato, president of the Birsa Ambedkar Phule Students Association, a Dalit organisation at Jawaharlal Nehru University. 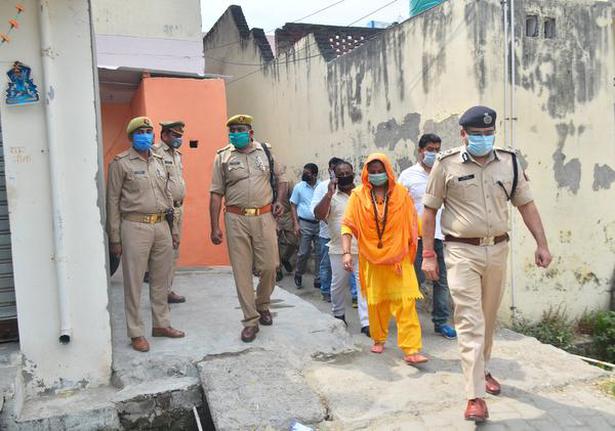 Sadhvi Geeta Pradhan, member of the Scheduled Castes and Scheduled Tribes Commission, arrive at Hanuman Nagar in Moradabad on June 7, 2020 to inquire about the murder of a Dalit man and his son, who were allegedly beaten to death by their neighbours over a property dispute.   | Photo Credit: PTI

“In India, people need to admit their role in everyday discrimination faced by Dalits and only then can a dialogue for change be initiated. We hope what they are seeing unfolding globally will lead to soul searching,” said Mr. Mahato. “People need to understand that every life matters.”

Ruth Manorama, who works for rights of Dalit women, said, “Indian Dalits have historically learnt a lot from the struggle of African-Americans.” She added: “This is a good moment to challenge the narrative in India also and talk about the age-old repression of Dalits, which is visible even during the COVID-19 pandemic with discrimination denying people aid.”

Dalits were among the worst hit by India’s strict lockdown, often having to wait longer for their turn to receive food or financial aid at local distribution points, and even being turned away, she said.

Over 300 people have signed a Change.org petition emphasising that the “lives of Dalits and minorities matter too” and urging Indian Prime Minister Narendra Modi to “admit … that caste discrimination is included in racial discrimination”.

Also read | After viral video of body being ‘airdropped’, Dalits get a crematorium

“It is a good time for people in India to understand and to point out to the government that racial discrimination is not only what you see in America,” said Henri Tiphagne of People’s Watch, a charity backing the petition. “It is the same as how so-called ‘untouchables’ are treated in India.”

Economics Of Oppression: The Growing Precarity Of Dalit Lives In India

Economics Of Oppression: The Growing Precarity Of Dalit Lives In India

Get the latest creative news from FooBar about art, design and business.